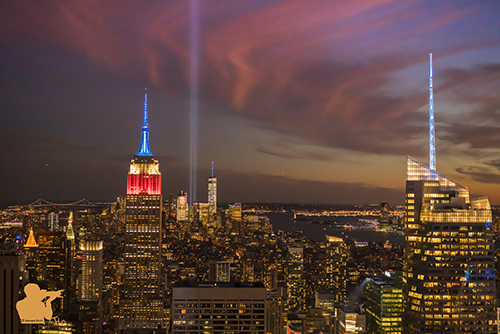 It took some time till I found the right words for this image and decided to create a new series of images.

a few days ago I visit a friend in New York. After I had booked the flight ticket, I became aware that I will be in New York for the 15th anniversary of 9/11, and also stay quite near to Ground Zero.

I remember the coverage in the news 15 years ago of this terrible event, but somehow it was very far away for me. Well, I was also 15 years younger.

Now, today, when I visited the square with the Memorial, I could feel a very special mood and atmosphere, that really touched me emotionally. Admittedly, the Americans have a good hand for events that should not be forgotten to place them very well  “in scene”, but both, the memorial and the museum,  are really worthy prayerful. Not loud, no exaggerated, but powerful to honour all those who were lost, as well as those who worked so hard to get the city through that terrible trial.

Standing at the reflecting pools, reading all the names, see all the people come together to honour all the victims concernes me in a very emotional way. And suddenly I was somehow directly touched. Touched mainly in despite of all the grief and great sorrow but also of getting a feeling of “being together”. I feel a cohesion not only in the pain, but also in the coherence for reconstruction and a powerful solidarity. People from all over the world gathered at this place 15 years ago to help and come together today to honour all those who were lost and who worked so hard together.

Such a great sadness, that only a great tragic event makes people hold together, no matter about the age, race, ethnicity and nationality. Those become completely irrelevant and everyone is a part of the community. Why can this not happen in good times?

This picture is one of the first taken on the Rockefeller Center in New York, Top Of The Rock, at 9/11 2016. It was an incredibly impressive blood-red sunset, that dipped the city for a briefly moment in a mystical light. When the two beams shine, in remembrance of the Twin Towers, there was a silence between all the visitors who were standing on the observation deck with me.

No one dared to say a word. It was not because of a surprise or a delight, it was rather because of the metaphysical ambiance and the emotional moment that made this moment a very special one.

“Tribute In Light” as these two light beams are called, is the most impressive and most powerful monument that I ever had seen, strong without words and powerful to honour the souls in silence.